Life in swinging London was in non-swing mode, not helped by my sad ‘digs’ in downtown Putney. An upstairs room in fact. In real estate parlance it would be described as a ‘builders dream’ or, depending on your situation, a dreary dump. I can still see the only form of ventilation. It consisted of one of those 15cm acrylic fans that are let into windows. Wow. What with that , the Pompeii walls and threadbare carpet, this boudoir was not quite the ticket if I could get my hands on a bit of that mini skirted, wide-eyed womankind as seen on TV. Not only that, every move I/we made would be tracked on the owners domestic grapevine. No doubt of that. This would not do. Will fix. In the meantime a trip to Wales seemed in order.

My companion was another Kiwi, male this time , and unemployed.
Two of the images from this sojourn in the mining valleys still remain. Although there is, or was, plenty of mining on the West coast of Tasmania, (including the hazards associated with this industry), they did not approach the scale of Aberfan. It must have been in late October that, by chance, we saw the massed grave of 144 people, 116 of them children, who were crushed under this collapsed colliery spoil tip. The lowering skies were a backcloth for a scene of utter devastation. 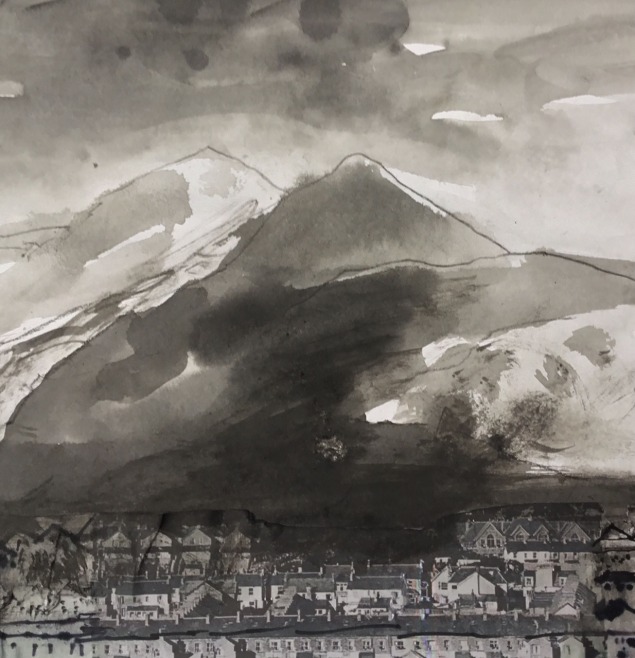 The second indelible memory of this trip occurred when we fetched up at a village pub to have a couple of beers. The natives, exclusively male, were friendly, and, of course, as soon as we opened our mouths, questions of nationality cropped up.
Once the words ‘New Zealand’ were uttered, the translation was immediate.
ALL BLACKS! Then….by some strange alchemy, a good chunk of the bar was cleared, various condiment bottles and napkin holders were placed in strategic points
and a goodly group of the locals gathered and, all very silent, watched proceedings.
THEN, a spokesman intoned, in a wonderful cantabile D Thomas sort of way exactly what happened at Cardiff Arms Park when there was a DISPUTED try in an earlier Welsh/ All Black game, which the All Blacks won. The pieces were expertly moved here and there around the park as the game progressed. The date? Wait for it…1905.

Back to London. After a while, but not with unseemly haste, domestic arrangements took a turn for the better. It must have been that linen suit that did the trick.
It seems that my other New Zealand friend, female this time, she of the table tennis fame, found heavy communal living not to her liking. Thus it was decided, (not discounting my iridescent wit and charm, nor her attractiveness) to put together an alternative arrangement. So, we agreed to implement a ‘cut the numbers’ living proposal.

Our accommodation, near Wimbledon Common, was a first floor flat. Downstairs, our Welsh landlady lurked. Her countenance resembled a map of the Brecon Beacons.
She was also armed with a 3 metre (or so it seemed) broom handle, which was whacked on the ceiling if she heard the slightest noise.
But, the real architectural gem in this place was having the bath conveniently located in the kitchen. If one was wondering what was for the next meal, this could be ascertained by seeing what detritus in the shape of fruit or vegetable offcuts that were bobbing about in the bath. It also facilitated a very convenient way of catching up on the days events whilst keeping a close eye on any boiling water involved in meal preparation.

Letter from a Wimbledon Wildcard

Letter from a Wimbledon Wildcard

The snide remarks about my sad tennis footwear got to me. Even a whip-round was suggested to deal with this. I would fix.

Whilst playing this wonderful game, I often ruminated on the very close and frequent Schoenberg/ Gershwin tennis matches. I imagined their tennis styles would mirror that of their wonderfully disparate musical genres. Schoenberg would be full of cool, perfectly calculated and cerebral ground strokes, not much spin, Gershwin loads of flourishes, rich slicing and topspin and theatrical volleying. How delightful.
Anyway …thinks, I must support the local High Street, none of this online stuff, as a way of getting my footwear. Putting on my old shoes (in the porch), an hour or so passed before I got to the shoe shop, this involved driving, visits to the Supermarket, and about a kilometre uphill stroll.

Shoes were produced, tried one on, and the sales assistant said I should do both feet. Really? I took of my left shoe. The salesman recoiled in a state of utter incredulity.
Verrucas? Smelly socks? NO! He had seen a bloody great toad right in the middle of that shoe.

Toad was very alive and very well and, one wonders, looking at him, do toads ever become the exact embodiment of being pissed off?
Was he ever!

The assistant became unglued. If I had said ‘look, if you can spare a box of tennis balls and a shirt or two, as a freebie, I will sort this problem and get the hell out of here,’ I bet he would have gone for that deal.
Cooler heads prevailed. ‘Leave him where he is’, I suggested. I will wear my new shoes home, and he can go in the bag in his shoe.

The following morning, our neighbour wondered why on earth there was an old empty tennis shoe planted in the middle of our garden.

They still remember it in the town.